Depending on your luck, the village might be shrouded in a wet, swirling mist, making it even more atmospheric.

The following 25km to Palas de Rei are tough going, but then some delightful country lanes pave the next few kilometres to Melide. The last few kilometres of the Camino, along busy roads into central Santiago de Compostela , are pretty bleak, but that sense of nearing the end of your pilgrimage powers you through. Tom explored the Camino de Santiago with support from Follow the Camino. Lonely Planet contributors do not accept freebies in exchange for positive coverage. Tom Stainer.

For over 1, years, pilgrims have traipsed wearily across the plains and mountains of the Iberian peninsula to pay homage at the shrine of St James in Spain's northwestern city of Santiago de Compostela. Related content Luxury travel Cruising to see the Northern Lights. Festivals Where to go in January for culture Previous.

Introduction to the Camino de Santiago

Adventure travel English exotica: a guide to the Isles of Scilly Next. I picked up a long-sleeved Icebreaker merino wool top a few years ago, and it was an obvious choice for both Caminos. It was thin but warm, weighed very little, and handled being worn every day for a month without being washed. There were a couple of early mornings when the temperature was barely above freezing, but wearing a second t-shirt under the merino top kept me warm until the sun came up.

The rest of the time, putting it over a single t-shirt was fine. You may want to go out at night in the larger cities without looking entirely like you just stepped off the trail.


After trying cotton t-shirts and dedicated running shirts, I've settled on quick-drying hybrids like this as the best of both worlds. Despite being so thin, this long-sleeved merino shirt kept me warm on chilly mornings and evenings.

I knew that good socks were crucial in helping prevent blisters, so I took three pairs of Icebreaker merino wool hiking socks , plus a pair of cotton ankle-length socks. The merino socks were great. They took a little longer to dry than expected, but I just hung them off my backpack the next morning if necessary. One sock developed a hole in the heel by the end of the walk, as did both of the cotton socks, but to be fair, none of them were anywhere near new when I started out.

I just replaced them all before my next long hike. Socks made from merino wool aren't cheap, but they're easily the best option I've found for hiking. I get far fewer blisters using them than anything else. I used these socks as an inner liner, with a merino pair on the outside. The socks rub against each other rather than my foot, helping prevent blisters.

I took three pairs of quick-dry boxer briefs on the Camino Frances, and they were all a bit different. I had a brand-new pair from Under Armour, plus two well-worn Champion pairs. The underwear that was most comfortable and caused the least chafing was the grey Champion 6" inseam version.

I suspect that was because it was longer than the other two pairs, and less prone to bunching up. The other two were fine for the first km of each day, but would start to rub after that. Without any time to heal, the chafing became a minor issue after a week or two. The best of the underwear choices I made for the Camino Frances. 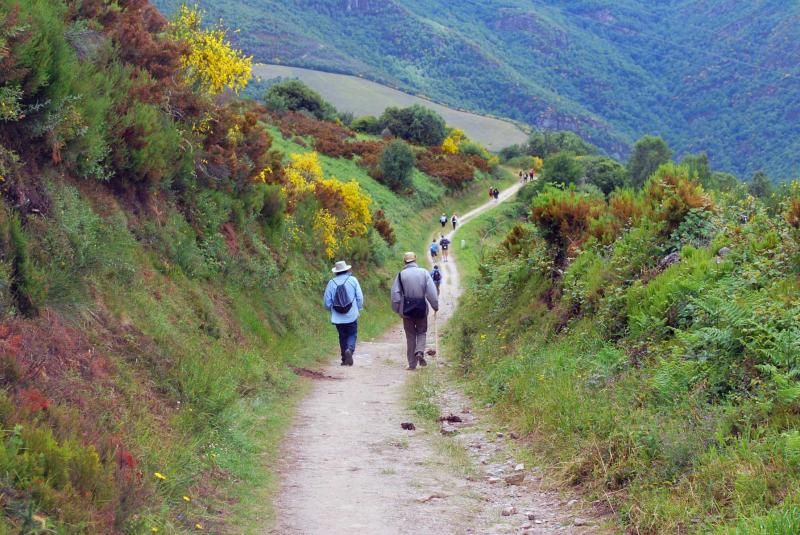 Unlike the others, these didn't chafe. I took three pairs of these for the Camino Portuguese, and they were ideal. I took a pair of running shorts , an ancient pair of hiking shorts, and some quick-dry hiking pants, and only one of the three made it to the end. The hiking shorts somehow developed an enormous rip down the front at the start of day three, and I had to replace them in Pamplona with an overpriced, ill-fitting pair. In the mountains and towards the end of both hikes, it was cold enough to need them once the sun went down.

Mine were cheap ones from Decathlon, but again, Columbia makes good hiking pants. Columbia makes great outdoor gear, including these hiking shorts. While the pants I've taken on my Caminos haven't been convertible into shorts, the extra flexibility is well worth considering.

The sun is harsh in Spain, especially in the afternoon.

I saw people with all kinds of sun protection, but for me, a cap was fine as long as I put sunscreen on my neck and face. Mine was a cheap North Face knock-off — I liked it because the brim folded up, so it could be stuffed in a pocket when not in use. It also came in handy when the rain set in. My poncho had a hood, and I put the cap on my head first to keep most of the rain off my face. Walkers on the Camino take one of two approaches to keeping dry in bad weather: a poncho that covers both them and their backpack, or a combination of a pack cover and rain jacket and sometimes, rain pants.

I opted for the poncho because it took up less room, and was happy with the decision. I was fortunate enough to only get rained on three times during the Camino Frances, and just once on the Camino Portuguese. When it did show up, however, it was heavy and for several hours. Neither my pack nor any part of me covered by the poncho ever got damp. Even though my face and everything below my knees were wet, it was only a minor discomfort rather than ruining my day.

To organise my clothes on the Camino Frances, I used this Hoboroll stuff sack. I'd never worn a poncho like this before, but it kept me and my pack completely dry from neck to knees even in heavy rain. This stuff sack was vital for fitting everything into a 30 litre pack, but I didn't need it once I'd swapped to a 40 litre version.

I used every day it for the first week or so, as nights were very hot. As I got closer to both the Atlantic and the end of September, the weather cooled and I used my sleeping bag instead — but I put the liner inside it when staying in dodgy albergues, to help ward off those bugs. Given its size, I was unsure whether to take a sleeping bag. In the end I decided to, and was happy I did.

Even though I had good weather, nights were chilly in the last half of my Camino. I could have probably got by using those scratchy wool blankets and sleeping in my clothes if necessary, but it would have still made for some cold, uncomfortable nights. Something to block out light and sound was vital if I wanted to get any sleep.

I always travel with earplugs like these , but as they were getting old, I made the mistake of buying new ones from a pharmacy in Spain before I left. The end result? Several sleepless nights when the snorers were out in force. Lesson learned: take several pairs of the best earplugs you can find, and test them out first. I took much better ones on the Camino Portuguese, and unsurprisingly, got noticeably more sleep most nights as a result. Bedbugs can be a concern on the Camino. I sprayed my pack and bedding with a Permethrin-like spray before I left. A lightweight silk liner is much more comfortable than a sleeping bag or blankets on hot nights, and gives extra warmth when things turn colder.

I carried a lightweight sleeping bag like this, which provided more than enough warmth even on chilly autumn fall nights. I'm a light sleeper, and snorers in albergues are a real problem.